I’ve always been fascinated by satellite communications and have been gathering ideas for building a satellite tracker right from the day I received my ham radio license back in early 2015. The primary scope of this project has always been to have an easy-to-use portable setup with as little additional equipment as possible. My usual setup for portable activities includes a FT-857D transceiver, a VHF/UHF handset, a portable vertical HF antenna (Difona HF-P1), a LDG YT-100 tuner, a light-weight tripod, a 10Ah lead gel battery, a couple of log sheets and – of course – a smartphone. Not wanting to exceed the total weight of the setup, I dismissed the idea of using a laptop for logging or controlling the tracker. I didn’t want to spend a fortune on commercial products as well. 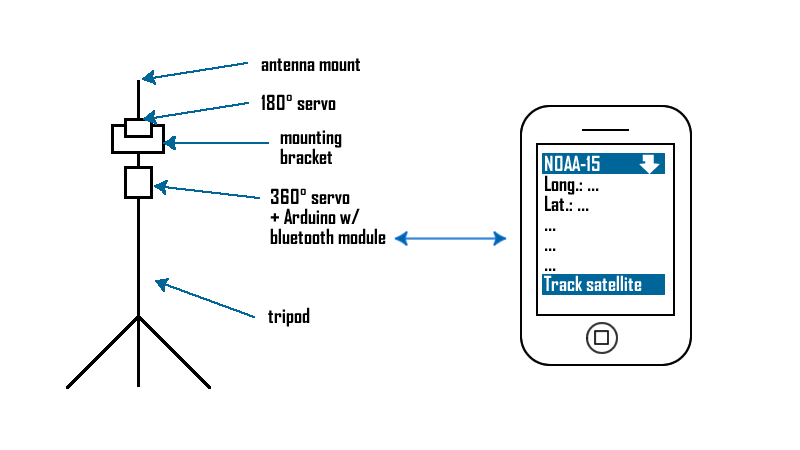 All you need for a basic antenna tracker is just a bunch of servos, mounting brackets and a micro-controller with a bluetooth module. If you decide to program a mobile app on your own, you’d need basic programming skills.

So I finally came up with the following idea: Having both an Arduino Uno and a Raspberry Pi I decided to build the tracker being based on either a micro-controller or a SBC. Thinking about the pros and cons of both devices I finally decided to use the Arduino Uno for steering one 360° continuous movement servo (azimuth) and one common 180° servo (elevation). Since I plan to use the tracker with a light-weight log-periodic antenna (weight: approx. 600g), those servos don’t need to be designed to handle excessive torque and so they are a) easy to obtain via eg. eBay or Alibaba and b) rather inexpensive.

The Arduino will be equipped with a HC-06 bluetooth slave module. This allows users to fetch satellite trajectory data off the internet with the smartphone and sending commands to the Arduino so that the antenna is automatically directed at the satellite. If everything works as planned, I’m looking for the following outcome: A homebrew Android app lists satellites that are about to be in range soon, one click sends azimuth and elevation data of the chosen satellite to the Arduino which properly steers the servos. If those basic functions work adequately further modifications could be: Automatic wireless frequency programming / automatic Doppler correction.

Servos and mounting brackets (in total approx. 40 €) as well as HC-06 bluetooth module (approx. 4 €) are on their way to Austria and hopefully arrive next week. Then I will start to build the setup and to code the Android app.